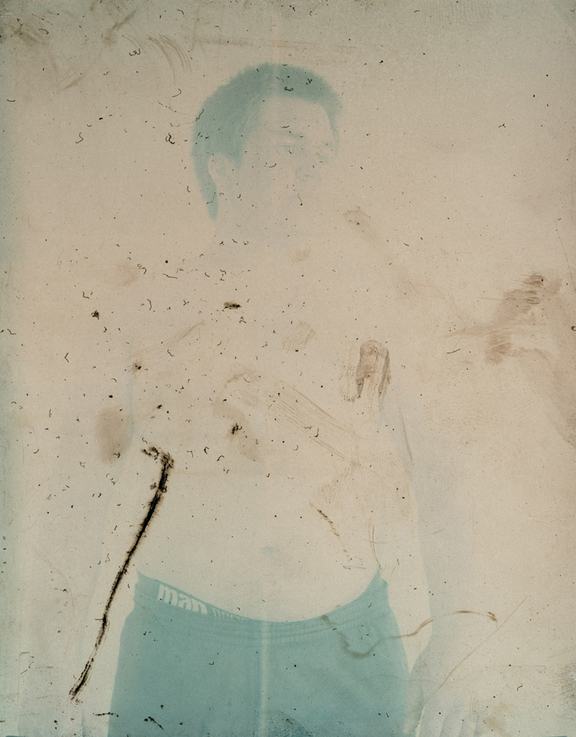 The exhibition is the first simultaneous presentation of two projects realized by Rafał Milach in Iceland. The cycle of photographs ‘In the Car with R’ was created in 2010 during the travel of the artist accompanied by an Icelandic writer Huldar Breiðfjörð. Five years after they met again during the shooting of a documentary film.

‘Weather Permitting’ is a compilation of two extremely different on the road stories. The first is the longest route that you can make around Iceland, the latter – a short passage over snowed gap. What these both stories have in common, apart from geography, is passing the way both understood as an attempt of getting to know ‘the unknown’ (photography) as well as physical struggle with the nature (film).

“To do the Ring” is an Icelandic expression that generally refers to travels on Route 1, the highway that encircles the country. To travel this road is something that most Icelanders do at some point in their lives and some even prefer to do it every summer. The reasons for going are of course different but many people probably set out with the idea that on the way they’ll learn more about their fellow Icelanders and native beliefs; that they’ll see more of their country. However, traveling on the Ring Road is a risky business. On the way you might learn something about yourself or your family, regardless of whether they live close to the highway or share the car with you. A lot of journeys on the Ring Road have ended in divorce but as a result of others, babies have been born. And there is no guarantee that you’ll learn more about Iceland on the way. When it comes to traveling (and photography?), what you see matters less than the way you look at it. We did the Ring. In May of 2010, driving a green Opel Astra Station, 1994 model. And we were back on square one ten days and 1450 kilometers later.

The cycle ‘In the Car with R’ is a part of ‘IS(Not)’ project by Sputnik Photos collective.

Þór lives with his mother on a farm in the northwest of Iceland. He goes to school in a nearby village while his mother tends their flock of two hundred sheep. They are the last remaining people to inhabit the Ingjaldssandur fjord and their annual struggle with the isolation of harsh winter is only made worse by the terrible condition of the only road that leads to civilization. Winding through a high and dangerous mountain pass, this road is frequently blocked by snow in the winter, often leaving Þór stranded and unable to make his way home, sometimes for weeks on end. Despite the local authority’s obligation to keep the road clear so that Þór can freely travel to and from school, the snow-storms are sometimes so fierce that the road can’t be accessed. Þór is coming to the end of his last year of compulsory school, terminating the local authority’s obligation to keep the road open. With what limited access there was no longer guaranteed, the future of the farm is now under serious threat.

The film is a part of ‘Iceland in Residence’ project by Sputnik Photos collective.

Rafał Milach (b. 1978) photographer, author of books, curator. He graduated from the Academy of Fine Arts in Katowice and the Institute of Creative Photography at the Silesian University in Opava, Czech Republic (currently a PhD student and lecturer at this university). For over ten years he’s realized projects focused on the transformation of Russian-speaking countries, as well as Central and Eastern Europe. He has earned worldwide recognition for his books – „The Winners”, „Black Sea of Concrete”, „7 Rooms”. Milach received scholarships from the Ministry of Culture and National Heritage, the Magnum Foundation, and the European Cultural Foundation. He has been awarded at several contests, including World Press Photo, Pictures of the Year International, and New York Photo Festival Awards. Co-founder of the Sputnik Photos, a multinational collective of photographers. His solo exhibitions include: the C/O Berlin and the Zachęta National Gallery of Art in Warsaw. His works are in the collections of the Centre for Contemporary Art Ujazdowski Castle in Warsaw, Museum in Gliwice, the C/O Berlin, the Brandts in Odense, Denmark, and the Kiyosato Museum of Photographic Arts in Japan.
www.rafalmilach.com